Blocked? Party of One?

I have spent endless hours, staring at a blank word document.  I’ve shut the computer, slammed the screen into the keyboard with frustration that is tactile.  I’ve tried to go blank.  Nothing works.

I’ve had ugly, silencing bouts of it before.  And I’ve always come out the other side.

But the thing is, every time feels like its the time.  The one that might end it.  The one I won’t get out of.

Wherein I Reveal How Truly Boring I Am

Chris at A Free Man is throwing an experiment.

He’s matching bloggers up, letting them interview each other.

I asked the questions at Southern (in)Sanity.

And now, Carrie from reconstructing fossils is trying to get straight answers out of me. Good luck, toots.

Have you ever had a blog stalker? Someone who kept leaving mean comments and wouldn’t leave you alone?

Knock on wood, no. I don’t think I’m polarizing enough to get mean comments. I also don’t come out strong on any issues. There are people who do it, and do it better than I can, so I leave it to them. I kind of wait to piss off some random nutter, some cat person who can’t take a joke, or a Nancy Grace Fan Club president, but so far, nothing.

Your blog persona is so funny and likable. Have you ever kept an anonymous, secret blog where you can let out all the mean, hateful thoughts (or for any other reason)? 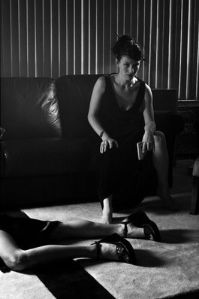 I’m sorry, I can’t hear you over my husband’s maniacal laughter. I think what he’s trying to say is that he knows where the mean and hateful thoughts go. (I told him to suck it.)

When I started this blog, I didn’t really know how secretive I wanted to be about it. And then, when I’d go 2 or 3 days without a hit, I figured out that I wanted people to read it. And so I kind of decided that the blog would be like a conversation I’d have with a friend. As a result, wide swaths of my life never make it on here. I’m cool with that. Because lord knows I have my moments of TMI on here, too.

I did try to start a secret blog. But I’m too lazy for two of them.

Have you ever used the word blogosphere?

Only accompanied by air quotes.

On the controversial subject of Mommy Bloggers, what do you REALLY think?

Some people might classify me as a mommy-blogger. I don’t. My favorite classification of what I’m doing here is by The Only Livin’ Girl In New York, who lists me as a “Mommy-ish blog”.

Were you ever voted “most-” anything in your school yearbooks? If so, what?

This question made me giggle. I went to a school that had 120 kids, Kindergarten-Grade 12. My graduating class consisted of 11 kids. (Of which I was the valedictorian, thank you very much.) So there wasn’t really an opportunity to be “most” anything. Our yearbooks were 10 page, soft-cover affairs. Whenever I meet up with people I haven’t seen in years, the one thing they manage to work into the conversation is something along the lines of, “Wow, Ginny, I just thought you’d be a doctor, or a lawyer, or….something. But hey, your kids are really cute.”

You’re a fellow bibliophile! What book would you say has been most influential in your life, and why?

Oh man, I wish I was much more well-read, and a deeper person. But I’m not.

I’m going with “A Prayer for Owen Meany” by John Irving.

And hey, I even married a guy named Owen. Coincidence? I think not.

How many questions are we supposed to ask?

Tee hee. I don’t know. I could go on forever. Thanks, Carrie, for the cool questions.

“If you were a tree, what kind of tree would you be?”

You know what I love about reading People In The Sun? 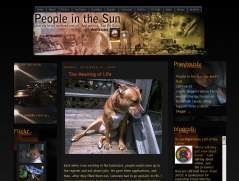 A lot of stuff, actually.  The pit bull.  The baby.  The Valentine to his wife.

Also?  The fact that he lives in Baltimore.  And every time I think about that, I start singing “I Love You Baltimore”, from Hairspray.  Not well, but enthusiastically.

Anywho, he had this interview up last week, and put out the call to see if anyone else wanted to be interviewed.  I immediately got all Horshack:

So here we go.

Wow, this made me all paranoid.  Do you think I’m too open?  I don’t say anything on the blog that I wouldn’t tell you the first time we met, at a party or at the playground.  Some people would smile politely, then walk away and avoid me from there on in.  And some people pull up a chair, and hang out, and its fun.  So, no.

I feel like the slow kid, but after waaaay too much time spent scanning the internet, I have no idea who that is.  But I’m going to say no.  He looks cocky, like he’d sleep with your best friend and be all, like, “What?”  when you called him on it.

Nearly daily.  And then I get my shit back together (or at least into some semblance of together) and carry on.  So far, so good.

Wow, loaded gun.  Because I think maybe I’m supposed to say ‘raise kids!’.  But I don’t know that.  I’m doing it, and I do it well some days and I’m a phenomenal failure at it other days.  (If I’m meant to do anything,  I think it’s maybe something with words.  Maybe)

No.  Not one.  I judge people by the stickers in their windows.  “Well, no shit he cut me off, he listens to a crappy radio station!”    Plus, the whole fish sticker thing got out of hand.

I’m always convinced that the purchase of a better car is right around the corner, so I’ve never adorned a car, never improved one.  I still have the remote starter my husband bought me 13 years and 3 cars ago.  I never had it installed.  Because that better car was sure to fall into my lap as soon as I installed it.

(Thanks for the interview, PeopleInTheSun.  And for the love of god/allah/buddah/spongebob, tell me who that dude in the picture is!)

So you know how a lot of bloggers will deny it, but they harbor secret fantasies about writing a real-live-honest-to-goodness-published book?  (Or is it just me?)  And you know how, when one of those bloggers actually gets a book published, I’m we’re so jealous we could just sit and gnash our teeth all damn day?  Well, not this time.

Stephanie is a blogger.  And now, she’s a published author.  And try as I might, I can’t be jealous.  She’s got the goods – funny, smart, insightful.  And she’s just so fraggin’ nice, I can’t begrudge her one morsel of success.

Her book’s available for pre-order at amazon.com.

And, even though amazon is uncoolly discriminating against me for being Canadian, and denying me free shipping (yeah, yeah, customs, whatever), I’ve pre-ordered mine.  Maybe you should, too, so we’ll have something to discuss the next time we get together for coffee casual sex a drink coffee.

Holidailies, You Kicked My Figurative Ass

I feel a little like a marathon runner, crossing the finish line.  (And let’s face it, this is the closest I’m going to come to that feeling, what with this piano tied to my ass.)

My commitment to Holidailies has officially been fulfilled.  33 posts in 33 days.  And not just any 33 days.  33 days that included shopping, cleaning, school concerts (yes, plural), tree decorating, stress, some yelling, some crying, 870 miles of highway in 4 days, lots of snot, pink eye and tonsilitis (in the same kid), not nearly enough booze, 3 clandestine cigarettes, kisses, hugs, disappointment, elation and one nut-punching incident my son can’t stop reliving.

I was hesitant to sign up.  Thought it would be yet another thing I started and didn’t finish.  I was wrong.

I actually enjoyed it.  A lot.  Never knowing what I was going to write, but knowing that I WOULD write.  Finding new blogs, meeting new readers.  And (not to toot my own horn, but AROOOGAH!!) having five of my posts picked as “Best of Holidailies” selections.

Big, big thanks to Chip and Jette, the people who make Holidailies possible.  Big thanks to Kitty, for introducing me to the whole thing.

I can stop, now.  I don’t have to write tomorrow.