Conversations With a 7 Year Old (Temporary) Only Child

“It’s a party that men have before their wedding, one last night to go out and get crazy before they’re married.”

“Do they take their girlfriends?”

“That’s no fair that girls don’t get a party!”

“Oh no, if girls want to, they can have a bachelorette party. Same idea, just all girls.”

“So you just go out with your own kind? All girls or all guys?”

“Mom, I think those parties are really smart.”

“I think it’s a good idea to go out one last night, and figure out for sure if you’re gay or not.”

(More silence,while I try to unravel where that went off the rails.)

“How was daycare today?”

“Oh, really? Which was worse? The jumpy castle, or the mini-golf? How dare those sadists put you though this? This clearly contravenes the United Nations Convention Against Torture! HAS ANYONE CALLED THE UN??!???”

“Mom, do you ever get tired of your own drama?”

(We tried to go to a movie. Their Internet was borked, so no credit cards, the cash confused the hell out of the teenage cashiers, and the theatre’s Fro Yo stand was down. Screw that. We improvised by hitting Marble Slab instead.)

“Chocolate. Large. With peanut butter cups and smarties and sprinkles and peppermint patties.”

(Fixes me with the iciest, most laser-like glare on which I have ever been on the receiving end.)

(Turns back to detachedly supervising the mix-in process.) 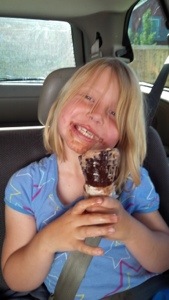 This entry was posted in Family, Humor, Mom and tagged conversations, Girl you cray cray, Kids. Bookmark the permalink.